Here are some facts about some of New Zealand's fish species and also some tips and tricks about where to target them and most suitable rigs to use. 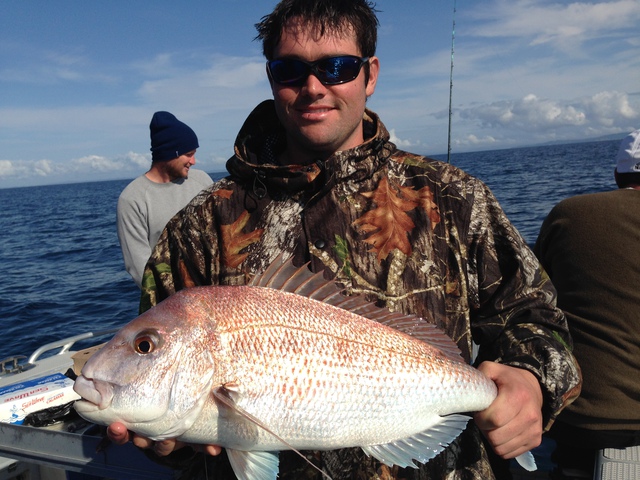 Snapper are known for their big molars “hence called Snapper”. Don’t make the mistake of putting your finger in an adult snapper’s mouth, it can literally be crushed. Snapper are one of the most sought after fish in the Hauraki Gulf for its soft white meat with very few bones. Snapper are usually a reddish brown on top and a silvery white on the bottom but depending on where they live the colour changes slightly. They are easily recognized by the spiky long pectoral and dorsal fin.  Pale brown snapper are found in deep muddy waters and the dark brown snapper are found close inshore or on reefs. Young snapper have silvery blue dots on their body and as they get older the spots fade away. Snapper live mostly in waters ranging from 5 to 50 meters but are often seen in waters that are 200 meters deep. Snapper can be found in open water and in reefs and in holes and between pins in the gulf. Snapper like to stay close to reefs or weed to enable them to dart for shelter if attacked by a predator.

Snapper are known to live to about 60 years and could grow to about 17 kgs or about 105 cms. From birth they take about 3 to 5 years to reach about 25 to 30 cms where they become sexually mature. They spawn from October to February when the water temperature is right and usually come back to the same breeding grounds each year. They release over a hundred thousand eggs each time and the male releases the sperm to fertilize the eggs in the large spawning grounds in the Hauraki Gulf. Generally snapper live in schools of approximately the same size, larger snapper are generally loners.

Snapper are carnivorous fish and feed on sea worms and small crustaceans found in the ocean. Big snapper eat fish and larger, harder-bodied animals such as sea eggs (kina), crabs and shellfish. Snapper are known for their adaptability and if one prey gets scarce they can alter their eating habits to different food. Snapper like warm temperature for better spawning success and the survival of its eggs and young. It takes 4 to 5 years for snapper to grow from the larvae stage to about 27 to 30 cms or adulthood.

Snapper spawn over several weeks and stages when the water temperature is warm enough (usually above 18 degrees centigrade). The eggs hatch in a couple of days, where at this stage the mortality rate is very high. Juvenile snapper have a very high mortality rate and as the fish get bigger the death rate decreases. Snapper spawn several times over the period and this I guess is Nature’s way to preserve the population. Female snapper wiggle to the surface releasing the eggs and the male simultaneously releasing sperm to form the bond. All snapper are born female, until they attain the age of puberty where nature dictates and changes some to males. Interesting isn’t it?? During year 3 and 4 of their lives about half of them undergo a sex change which is called a hermaphroditic stage, to become males.

How often have you gone out and found that the snapper are full on the sounder, the tides are great, the moon is sitting in the right phase, the winds are favourable and yet you have not scored a bite? Don’t worry – you are not the only one who has been in this situation. You would generally find this situation during the spawning cycle where the snapper could be real easy to catch or frustrate you.

Snapper form in massive schools of male and females along the coast to spawn. This is when they are fussy eaters and tend to get into the reproduction rhythm with all it has and as nature would have it.  It is at this time they tend to be aggressive as well, they may not take dead or cut bait but often they will attack a soft bait or bottom ship with a vengeance.  Cube sized bait works during these times as well and I find heading out into the deeper sandy and kelp areas produces better results. Lots of burley is also the key where it throws out a strong scent and arouses the bite.

Spawning is a very important time when nature dictates the future of our snapper. Taking what is really essential would be your way of sustaining this population.  Try not to keep too many of the spawning females if possible and do your bit. Males can be identified with the darker brown colour under the jaw and around the gill section. The females are generally white underneath.

Snapper can be caught on a variety of rigs either anchored or trawling.
(a) Stray line rigs: These are rigs with a meter or two of a 60 to 80 pound leader with hooks at the end and straying into the tide. The sinker is a running sinker just above the swivel joining the leader. Use the sinker weight according to the tidal stream. The lighter the sinker the better. Sometimes with a strong tidal stream, the sinker will have to be heavy to take your hooks close to the bottom.

(c) Soft Bait: There ‘s so many options available with soft baits. The bottom ships and the slow jigs can be very successful. Cast your soft bait into the tide and let it drift slowly. Techniques will change depending on what soft bait is being used.