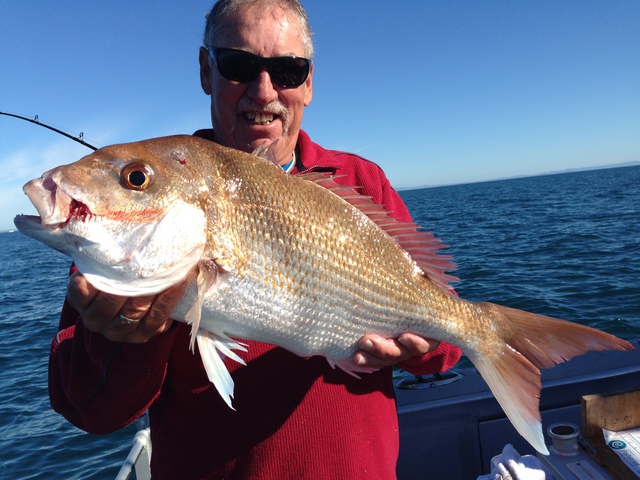 With the water temperature cooling down the fish are starting to move. It is in this part of the season that the fish are in a hurry to fatten up and get in great condition for the coming cold winter months. Having said that I check the water temperature regularly and it is still 18 degrees (plus or minus a little bit). That only means that there will be some good fish still holding out in the shallows.
The Rangitoto channel is slowing down in the day and it's getting to be real hard work. The evening when the sun is just setting seems to be the best time to get in there up and close in the shallows of flax point or #7 buoy where the fish seem to congregate. Stray lining in the shallows with light sinkers is the key. Fresh bait is the best and if you get some yellow tail or the likes then you have just increased your chances. Just a few nights ago we were pulling in snapper up to 62 cms. That's really some nice fish. Still waiting for my customers to send me some pictures as I had a broken camera. Will post this when they send me some. Hopefully soon!!

Out at Motuihe and the holes in between Waiheke i find that it's starting to get patchy. One day they are there and others not. But it's worth giving it a shot if you plan to be heading in that direction or close there.

In and around the cable lines near Tiri and the worm beds are holding good schools of bait fish and just 2 days ago there was a pod of killer whales just outside administration bay. We all know they are after the rays that hang out in the reefs of the bay and that's a treat for them. Playing mostly with their catch and still enjoying a meal. Great to see!!

Out at the noises and three sisters there's still some good sign but you have to get past the mostly smaller fish if you want a feed. What a waste of fish sometimes, in keeping with the new regulations. There seems to be an enormous number of snapper between 28 and 29 cms and as we all know the legal sizes have changed from the 1st of April to 30 cms. In throwing them back, the shags seem to have the last laugh and it's just made their lives all the more easier. We all know that fish handled and thrown back have a very small chance of survival. Especially when they are coming from the deep with their swim bladders inflated. Who are we kidding here - are we really sustaining the snapper population. Take a moment and think for yourself!! You will be the best judge.

Getting back to the fishing - out behind the ahahs in the deep 35 to 40 meter holes there some good fish holding. Some nice ocean going Kahawai coming through if you like them. Kahawai are a bit of an under-rated fish, they are great if smoked. Just getting through them in targeting the snapper seems to be the hardest. I like Kahawai and with light gear it can really give you a buzz. Just don't like it when we have 3 hook-ups and they are all running. Under the Kahawai are some really good snapper and we are being quite successful even though it is a mission getting past the Kahawai schools. Right in this very same area are the workups. Huge bait fish balls being chased around and smashed by the Kahawai and the big snapper and kingfish.

Out at Gannet rock and the firth, there's a strange pattern taking place. Lots of sign on the sounder but being hoarded by the smaller fish after the first few big ones come on board.

Same North of Shearers and Tiri, lots of sign and again lots of smaller fish on some days. The challenge is to get past the smaller fish and you will be in for some nice snapper.